Blog - Latest News
You are here: Home / Uncategorized / Olives in the Alpujarra 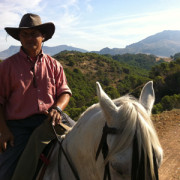 Riverside Lifestyle discovers the groves, the food and the culture of a beautiful Spanish region that’s off the beaten track. Their salty, oily tang makes them something of an acquired taste, but so is the sharpness of a crisp dry wine!

Not unlike wine, of course, it helps if you know what makes the olive taste so great. Riverside Lifestyle journeyed to deepest Spain so we could divulge the secrets of the best olives and olive oils. (And not so we could ski, sun ourselves and wander amongst the beautiful Moorish architecture. Honest.)

We hope you won’t mind us telling you that we also happened to stay at Riverside’s own olive grove in the Alpujarra, where the decades-old trees and ‘cortijo’ are looked after by our good friend John Paco, or JP as he is called! A dedicated olive aficionado, it just so happens that he was more than willing to share his know-how about the fruits, food and a few favourite must-dos of the little-travelled region with you.

“I have about 150 olive trees, which are harvested anytime between November and March. The longer you leave them, the sweeter the olives.”

JP’s trees have to be pruned every two years or so to encourage growth, and they’re watered once a month during the summer. So far, so simpler-life; but it does have its hardships: the olive fly is a major pest. One thing I can’t help loving about his sprawling grove is that he controls it the eco-friendly way: with pheromone traps instead of spraying.

Harvesting is a similar story. “It’s done by teams of people using large nets and bamboo poles,” he explains. “Once picked, the olives have to be pressed within days at the local olive mill, where it’s important to book the first press of the day.” The reason? “To get a cold press, and so your olives aren’t contaminated with other people’s; this gives extra virgin olive oil.”

As it turns out, making sure we get the best-tasting olives back home is a precise business in other ways, too. “It’s important to ensure that olives are picked before they become too saturated with water, or they’ll lose their flavour,” JP says. “Olives that are harvested black are used for oil, and olives that are for eating are picked earlier when they’re green. I harvest as late as possible to get the maximum oil, but it’s always a balance between losing olives to the wind and the fly and gaining the best possible flavour.”

Picking the Best of the Bunch

So what about when we’re choosing from the juicy fruits at our local deli: are there particular types of olive we should be on the lookout for?  “My main olive – the world’s most important, and Riverside Lifestyle’s olive of choice – is the picual, which goes to the mill and is used for cooking, dressing and a healthy diet,” JP recommends. “I also grow some Arbequina olive trees, which are smaller; these olives are bottled and used for eating.”

If it’s the table variety you’re after, tread carefully. “Table olives can be green or black. The green one in Spain is called the manzanilla, and is often stuffed with anchovies or chillies,” says JP. “Another table olive is the Sevillano, which has a low oil content and is only used for pickling.”

Spanish cuisine is the perfect way to introduce olives into your diet without overdoing it on the flavour front. “Spaniards use olive oil instead of butter or vegetable oils on the whole, and often enjoy tomato and olive oil on toast; called tostada con tomate,” JP enthuses. “I personally enjoy a small thimble of pure oil first thing in the morning.”

If a shot of the slick stuff doesn’t do it for you, there are subtler ways to get more of it on the go; and top of JP’s list is gazpacho. Originally a cold, white soup from Malaga served with garlic and almonds, he tells me that nowadays Andalusians often take it with tomatoes, peppers and cucumbers. “Allioli – also called aioli, and made with garlic, oil and eggs – makes a really strong mayonnaise,” he adds. “There’s also all manner of tapas that uses olive oil; I especially like fried fish dishes like whitebait, or ‘boquerones’ in Spanish.”

The Riverside Lifestyle in the Alpujarra

Okay, I hold my hands up: we didn’t spend the entire time we were in gorgeous Órgiva on the olive trail. But let’s be honest; it would have been a travesty to come all this way and miss out on the local area.

JP was attracted to the place by its history and architecture, and the desire for the ‘campo’—or countryside—lifestyle. But there’s more to it than the fertile, temperate land that so loves his olives.

“The Alpujarra is noted for the white villages with their Moorish architecture, and the large number of people who pursue an alternative lifestyle,” he explains. They’re a people after my own heart, finding their own balance between working and making the most of life. “There are all sorts of walks, monasteries and working artisanal farms nearby, and you can stay in anything from a bed-and-breakfast yurt to an alternative therapy centre or even a Buddhist community.” As soon as he mentioned it, I knew I had to visit one of these during my stay; namely the O Sel Ling Buddhist monastery in the mountains above Órgiva.

Setting off by car I wound up and up the mountain path, passing the pretty whitewashed villages of Bubión, Capileira and Pampaneira on my way. You can’t help but notice that despite their similarities, they all have their own character, from their artisanal stalls to the quirky cafes and restaurants.

Eventually my little car could take me no further, and I climbed higher and higher on foot. Up here in the remote peaks, I passed the occasional converted house and scenic wooded areas, finally reaching 1,600 metres and the palato of O Sel Ling itself. Serene and spiritual, there was no-one to be seen; but that didn’t matter with a view like this: the Tibetan-style building, the colourful bunting fluttering in the breeze, the delicately carved and painted artworks, and the misty mountain vista.

It wasn’t just the monastery; from the Riverside plantation there was beauty in every direction: the snow-tipped Alpujarra mountains are flanked by the Sierra Nevada and the Mediterranean coast.

“The mountains are perfect for skiing, trekking and horse-riding,” JP tells me; and he isn’t wrong. Later that day I find myself riding in the hills among the orange trees and olive groves, where views of the mountains and the sea are stunning. The pistes of the Sierra, meanwhile, are popular among locals, but a burgeoning discovery for outsiders, which means they’re free from the crush of tourism you might expect.

“Granada is only 45 minutes away, and the coast is about 30 minutes,” our olive gourmand promises, and sure enough, I’m just a short drive from the jaw-dropping beauty of the Islamic and Christian architecture and gardens that mingle in Granada and the Alhambra; a place where the light is especially striking at night. The Moorish poets mused that it was ‘a pearl set in emeralds’. And I have to admit, they have a point.

Want to join the discussion?
Feel free to contribute!

This website uses cookies to improve your experience while you navigate through the website. Out of these, the cookies that are categorized as necessary are stored on your browser as they are essential for the working of basic functionalities of the website. We also use third-party cookies that help us analyze and understand how you use this website. These cookies will be stored in your browser only with your consent. You also have the option to opt-out of these cookies. But opting out of some of these cookies may affect your browsing experience.
Necessary Always Enabled
Necessary cookies are absolutely essential for the website to function properly. This category only includes cookies that ensures basic functionalities and security features of the website. These cookies do not store any personal information.
Non-necessary
Any cookies that may not be particularly necessary for the website to function and is used specifically to collect user personal data via analytics, ads, other embedded contents are termed as non-necessary cookies. It is mandatory to procure user consent prior to running these cookies on your website.
SAVE & ACCEPT