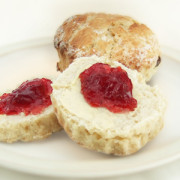 There are so many places to visit in Hampshire – Highclere Castle, HMS Victory, the Mayflower Theatre, the New Forest, and that’s just to start with – but one of the best ways to spend an afternoon while you’re staying at Riverside Cottage has got to be with a visit to the little village of Chawton in Alton. 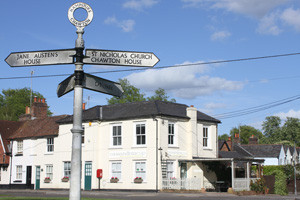 The first thing you’ll notice about the scenic little spot is the picture-book houses with their thatched roofs and pretty gardens set back off the road. A short walk less than half a mile out of the main village will show you the beautiful Grade II-listed St. Nicholas Church in the grounds of Chawton House, where Jane Austen’s brother Edward Austen Knight once lived. But a favourite way to while away the time while you’re here is with a wander around Jane Austen’s House Museum.

If you’re a bit of an Austen fan yourself, you’ll know that Chawton is where she revised Pride and Prejudice, Sense and Sensibility and Northanger Abbey, as well as where she wrote Mansfield Park, Emma and Persuasion—and yes, the desk she wrote them all at is still here, as well as manuscript letters, jewellery and a patchwork quilt she made with her mother, Cassandra Austen, and her sister, also called Cassandra.

The two most important women in Jane’s life are what inspired the name of our tea room opposite Jane Austen’s house : CassandraCup Tea Room and Bistro is just across the road, and it’s a little something the Riverside Lifestyle team can’t help smiling about, since we’ve been working on it for months now, and we’re finally opening the doors!

Come by for a chit-chat and a sparkling elderflower cordial or a liquorice and peppermint leaf tea; choose between Darcy and Edward Ferrars over a ham and cheese toastie or a chilli con carne jacket potato; or really indulge with a cream tea that comes in two flavours: classic or lavender, where our tea, homemade scones and clotted cream are served with our own Riverside lavender and raspberry jam.

You’ll find plenty more on the shelves at the Cassandra tea rooms – all our jams, marmalades, chutneys, olive oils and other nibbles – take them home and enjoy where ever you are or give to friends and relatives as the perfect artisan gift

If you’re tempted to stretch your legs a little further, there’s a wonderful country walk from Chawton to Farringdon that begins in the small car park next to our little café. Beginning here, you’ll take in sights such as the pretty land springs that are among the sources of the River Wey, which Jane described as ‘a fine running stream’; Chawton House Estate, where Jane often visited her brother; The Wakes at Selbourne, the Common of which was where Jane and her friends attended ‘gaieties’; and Farringdon itself, where Jane and her friend Harriet Benn took tea.

By the time you get back to the cottage in the evening, you’ll deserve to put your feet up: put the kettle on, spread a slice of hot buttered toast with Seville orange marmalade and pick up one of our beloved collection of Austen novels from Riverside’s bookshelves. There’s nothing like reliving a classic romance in the easy chair by the fire on a cool night, or on the terrace looking out over the paddock in the summer. After all, there is no enjoyment like reading, is there? How much sooner one tires of anything than of a book…

Want to join the discussion?
Feel free to contribute!

This website uses cookies to improve your experience while you navigate through the website. Out of these, the cookies that are categorized as necessary are stored on your browser as they are essential for the working of basic functionalities of the website. We also use third-party cookies that help us analyze and understand how you use this website. These cookies will be stored in your browser only with your consent. You also have the option to opt-out of these cookies. But opting out of some of these cookies may affect your browsing experience.
Necessary Always Enabled
Necessary cookies are absolutely essential for the website to function properly. This category only includes cookies that ensures basic functionalities and security features of the website. These cookies do not store any personal information.
Non-necessary
Any cookies that may not be particularly necessary for the website to function and is used specifically to collect user personal data via analytics, ads, other embedded contents are termed as non-necessary cookies. It is mandatory to procure user consent prior to running these cookies on your website.
SAVE & ACCEPT